Sophia Rocco: Hoping to make the world a better place through a potential renewable energy source 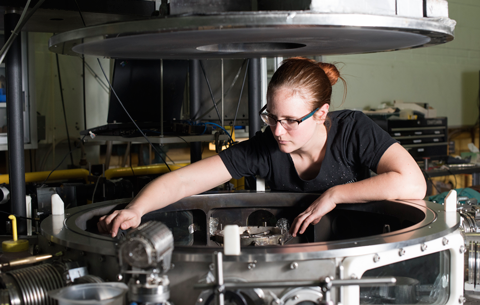 When she was looking at graduate schools, physics major Sophia Rocco thought she would be in a materials science program bridging her interests in electricity and magnetism and novel materials for solar cells. Chancing upon the School of Electrical and Computer Engineering at Cornell, she discovered the Laboratory of Plasma Studies (LPS). As she learned more about the lab and the idea of fusion reactors as an infinitely renewable clean energy source, Rocco realized that she wasn’t necessarily interested in solar power, but the crossover of electricity and magnetism and the potential for renewable energy.

“When I say to most people that I do plasma physics, they say ‘Oh, so you work with blood?’” says Rocco, a second-year Ph.D. student in the Laboratory of Plasma Studies at Cornell. “And then I get to explain that the name ‘plasma’ is actually misleading.”

A plasma is basically a highly ionized gas. Overall, it is not charged but because the atoms are ionized, the electrons are free from the bonds of the nucleus. If you put it in an external electric or magnetic field, you’ll get different behavior from the protons and neutrons than you will from the electrons, which is not at all the way a gas behaves.

When she first came to LPS, Rocco knew very little about plasma physics. It’s clear she’s come a long way and yet admits that she’s still learning about the field. “This is a very supportive lab environment,” said Rocco. “Everyone is always incredibly willing to answer my questions, and let me jump in and try to help and explain their experiments to me. We have a great team of technicians that help us run the machines, but if there’s anything we want to learn, anything we want to help with, it’s greatly encouraged. You’re really encouraged to understand what is going on and develop of your own diagnostics. That’s what really impresses me about the lab—it’s very hands on.”

Rocco uses COBRA, the 1 million ampere pulse-power machine at LPS to produce plasmas out of puffs of gas. “Gas puffs are generally thought to be used as x-ray sources, but I’m not really looking at them in that way,” said Rocco. “I’m looking at what goes on before they produce the x-rays, at the basic science of what’s really going on.”

COBRA’s gas puff valve has three concentric nozzles with a jet in the center. The two rings surrounding the jet can be filled with whatever gas and density profile she wants, usually using neon, argon or krypton. The current goes through the gas puff and creates a magnetic field that compresses down the ionized gas, making a sleeve around it and bringing it into a pinch at the center. This is called a z-pinch because the current is going in the z-direction.

“The current goes up, then around and pinches it at the center,” says Rocco. “Generally there is inward radial motion, but within that things are eddying around, with the cooler, outer material mixing with the hotter material closer to the center, creating instabilities. If you’re trying to create fusion, you want to have stable plasma conditions. We’re trying to mitigate instability and figure out where it is happening so we can make the plasma more stable.”

There is a good understanding already of the instabilities in gas puffs and in plasma in general but Rocco is interested in seeing where exactly things are going, how the instability is seeded, where it comes from and how the instability grows as the implosion proceeds. She looks at the distribution of flow velocities within the z-pinch to find answers to even more specific questions like: Where are the ions going? Where are the electrons going? How fast are they moving? Are they only coming in radially or are they also rotating as they move? Is there any turbulence? If the dynamics of the implosion can be better understood, there is potential for it to be controlled, and possibly used.

“What do I like most about what I do?” said Rocco. “I know I wouldn’t be happy doing something that was easier. I would be bored. I work very hard, but I do it because I love it and the challenge of it. If I can contribute just a tiny drop in the bucket towards making renewable fusion energy happen in the future, that would be great. If by doing that, I can somehow make the world a little bit of a better place and contribute to a general understanding of how the world works, why things work the way they do, that’s another part of the drive. And especially with plasma there’s still so much to be found out.”