Polina Alexeenko, Jonathan McCandless and Brian Rappaport, all Ph.D. students in the School of Electrical and Computer Engineering have received fellowships as part of the NSF Graduate Research Fellowship Program.

The program recognizes and supports outstanding graduate students who are pursuing full-time research-based master's and doctoral degrees in science, technology, engineering, and mathematics (STEM) or in STEM education. The GRFP provides three years of support for the graduate education of individuals who have demonstrated their potential for significant research achievements in STEM or STEM education.

According to the organization’s website, The NSF Graduate Research Fellowship Program (GRFP) helps ensure the vitality of the human resource base of science and engineering in the United States and reinforces its diversity. The program recognizes and supports outstanding graduate students in NSF-supported science, technology, engineering, and mathematics disciplines who are pursuing research-based master's and doctoral degrees at accredited United States institutions. NSF Fellows are anticipated to become knowledge experts who can contribute significantly to research, teaching, and innovations in science and engineering. These individuals are crucial to maintaining and advancing the nation's technological infrastructure and national security as well as contributing to the economic well-being of society at large.

For general information about the program, visit NSF's GRFP website. 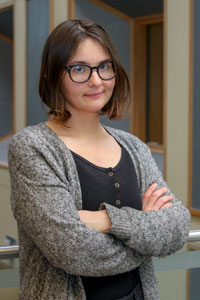 Polina Alexeenko’s NSF GRFP project is entitled “Novel Mechanisms for Coordination of Electric Vehicle Charging”. Through a collaborative project with New York State Electric and Gas, her current research is devoted to addressing the challenge of electrifying the transportation sector at scale. The transportation sector is the largest contributor to greenhouse gas (GHG) emissions in the United States. Electrification of the transportation sector has the potential to dramatically reduce GHG emissions and the nation’s dependence on fossil fuels. However, there are significant challenges to the integration of electric vehicles (EVs) into the power grid. One of the key challenges is the limited hosting capacity of power distribution infrastructure. Residential EV charging can substantially increase the peak load of a household, causing an exceedance of the capacity of the transformer serving the home. This exceedance can result in accelerated aging of the transformer and a need for costly replacement of the transformer and power lines.

Alexeenko is a second year Ph.D. student working with Professor Eilyan Bitar on the control and optimization of electric power and transportation networks. She earned a Bachelor’s degree in mathematics and economics at the University of California, Berkeley. 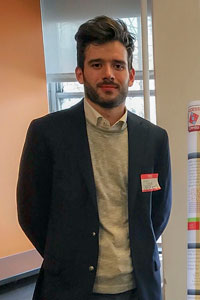 Jonathan McCandless’s NSF GRFP project is entitled “High-Speed Computing: Toward Integration of Memory and Processing with Ga2O3.” Gallium oxide (Ga2O3) is a promising semiconductor which has gained much attention over the past few years. Ga2O3 has different phases (spatial arrangement of atoms within a unit cell). The beta phase is the most thermodynamically stable phase and consequently, the most studied. The other phases are unstable and tend toward the beta phase.

McCandless has proposed growing and stabilizing another phase which is not inherently stable. Once this is done, he plans to investigate the novel properties of the phase, which is theorized to be ferroelectric. It could then be used to create a memory function based on flipping of the material's polarization. This would allow for the integration of memory and processing functions within the same chip, increasing the overall computing performance. 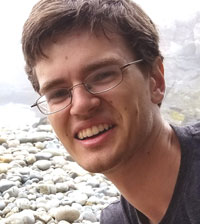 This project will investigate the use of channel charting in localization and tracking of objects which are not themselves transmitting wireless signals, but are located near a transmitter-receiver pair. This capability would have many practical uses, including predicting people's movement to assist home automation devices or detecting objects in autonomous vehicle-to-vehicle communication scenarios. However, it is hard to get past the obvious and disturbing use case: locating people without their consent (and without their cell phone in transmit mode). Arguably one of the most critical aspects of this project is to understand these threats to privacy and to find ways to prevent them. If these threats are not well understood, there will be no way to protect against them in the future.