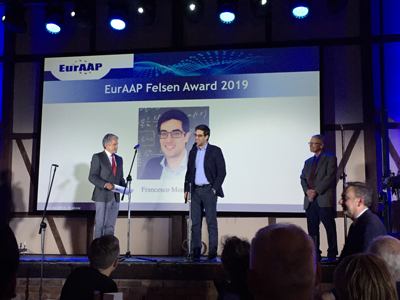 Francesco Monticone, assistant professor, ECE was recently awarded the 2019 Leopold B. Felsen Award for Excellence in Electrodynamics by the European Association of Antennas and Propagation. This career award is issued, by nomination only, to an early stage researcher under 40 years of age to keep the memory and scientific legacy of Prof. Leopold B. Felsen alive, as well as to foster academic excellence in the electromagnetics community, by giving recognition to outstanding fundamental contributions from early stage researchers in electrodynamics.  The Award was officially presented at the banquet of the 2019 European Conference on Antennas and Propagation (EuCAP), on April 3, 2019, in Krakow, Poland.

Monticone’s current research interests are in the areas of applied electromagnetics, metamaterials, plasmonics, and nanophotonics, with applications ranging from microwaves to optical frequencies. His group investigates - theoretically, numerically and experimentally - innovative and extreme aspects of wave interaction with engineered metamaterials and nanostructures, which may have strong scientific and practical impact in the coming years.

Monticone has authored and co-authored more than 100 scientific contributions in peer-reviewed journal papers, book chapters, and peer-reviewed conference proceedings, receiving more than 3000 citations, and has given over 20 invited talks and seminars. His first-author papers have appeared in several high-impact journals, including Physical Review Letters (three times selected as “Editor’s Suggestion”), Nature Nanotechnology, Proceedings of the IEEE, Optica, and Science. He received the U.S. Air Force Office of Scientific Research (AFOSR) Young Investigator Program Award (YIP) in 2018. Monticone is a member of the IEEE, the American Physical Society (APS), the Optical Society of America (OSA), and a full member of the International Union of Radio Science (URSI).

Find out more about Monticone and his work: