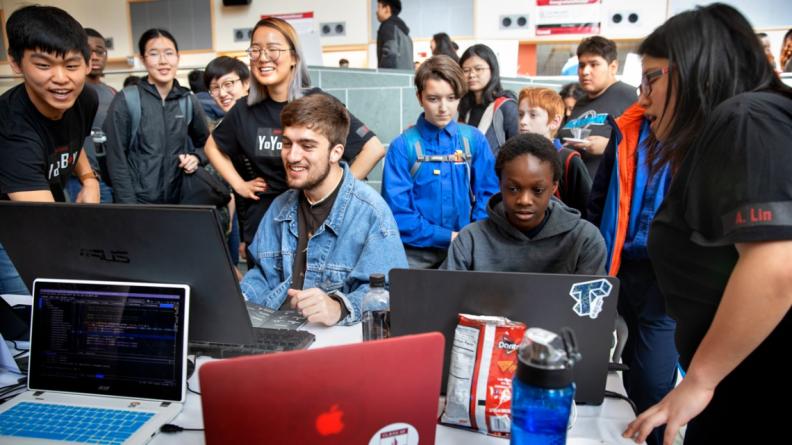 Can a digital platform of women’s stories inspire and advise the next generation? Are there low-cost ways to reduce the stigma of menstruation in rural India? How do you balance an autonomous bicycle? Can a video game player build a city on a folklore-inspired turtle’s back?

A student explaining PSYAFE, a platform to match students with mental health professionals.

These were among the challenges met by a diverse array of student research projects, on display April 24 at the annual BOOM (Bits on Our Minds) showcase in Duffield Hall. More than 200 students, the most in BOOM’s 21-year history, used technology to try to solve problems large and small, local and international, for entertainment, convenience, increased equity or social good.

“It’s just really nice to be part of a team that works together to make the world a better place by creating these products,” said Evan Cheng ’20, whose team is prototyping a product for menstrual waste called “Incinerator.” (pronounced “incinerator-period.”) These incinerators will add filters and solar panels to mudkas – clay pots rural Indian women use to burn menstrual waste, releasing toxic fumes – to make them environmentally harmless.

The incinerator was one of several products seeking to make a global impact. Another was Apomden, an app to handle hospital bed management and availability in developing countries with limited internet connections.

Others sought to fill needs closer to home, including an app called cue: Events at Cornell, Just for You, to help students discover and stay connected to events and activities on campus; and Eatery, to explore Cornell’s dining options. Ezra Box, a platform that matches students seeking storage with students who have extra space in their apartments, grossed $10,000 in 2018. Its organizers said they expect to grow this year because of improvements to their website and model.

“We’re all learning something from our own niches and our areas of expertise,” said Andrei Kozyrev ’20, who handles the engineering aspects of Ezra Box. “For example, developing the website was quite complicated – there were lots of different components and parts. You get to take your classroom knowledge and adapt it to the real world, and we also learned how startups work.”

The event was co-sponsored by Computing and Information Science and Cornell Engineering. Projects were demonstrated for fellow students, instructors and invited area middle-schoolers; representatives from nine corporate sponsors served as judges, awarding $750 to each sponsor’s favorite project.

The projects arose from research teams, coursework or simply students’ shared desire to create something. One group of students seeking to help women protect themselves from domestic violence developed LIBRA – an engineered bra that discreetly monitors its wearer’s heart rate, records audio and can even alert the police if its clasp is forcibly broken.

“In our research, we discovered that what makes sense is helping women collect more evidence,” said information science master’s student You Sun. The idea, which emerged from their Human Computer Interaction Studio class, took shape as the team worked with the Cornell and Tompkins County advocacy centers to learn what might be most helpful.

The Cornell Autonomous Bicycle Team has been working for two years to develop a self-balancing, self-navigating robotic bicycle.

“The audio recordings would be automatically uploaded into a cloud system, where a victim’s advocate could access the client’s recording,” said Andrea Gonzalez-Del-Valle ’19. “Keywords could indicate signs [of abuse], and once [the advocate] is with the victim they can mark instances of abuse, and use them in court to get a restraining order.”

Down the hall from the Duffield atrium, the Upson Hall lounge became a showcase for student-built autonomous vehicles – a submarine, an aircraft and a bicycle. The challenges in designing, programming and building these vehicles are great, the students said, but so is the satisfaction in creating something useful and innovative.

“If you stop telling a car what to do, it doesn’t fall over,” said Daniel Glus ’20, a member of the Cornell Autonomous Bicycle team. After two years of work, their bicycle can balance and be controlled, though they are still adjusting its GPS, which must be more precise than what a car needs because the bicycle is so much smaller.

“Unlike competition-based teams, where you’re redesigning something similar every year, we’re really just trying to make it work,” said team member Sebastian Colom ’21. “So sometimes it can be frustrating, but once you’re able to get over that hill, it becomes such a proud moment – that you’ve done something so unique.”

From among the accomplished members of the Cornell ECE Class of 2020, two seniors, Katie Bradford and Kevin Ying, have been selected to receive prestigious year-end awards. The William S. Einwechter... Read more about Two graduating seniors recognized for academics and service

The annual award is typically given to one graduating Ph.D. student from the School of Electrical and Computer Engineering, based on the significance of their doctoral research. This year, two winners... Read more about Announcing the 2020 ECE Outstanding Thesis Research Awards