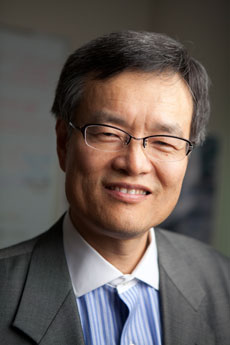 The Kent Active Management System (KASM) project with United Kingdom Power Networks (UKPN) has won the 2019 “Innovation Project of the Year” at the Networks Awards in Birmingham, UK. As technical lead of the project, ECE Professor Hsiao-Dong Chiang developed the high-performance, integrated system along with his company, Bigwood Systems.

The KASM project trialed new contingency analysis software (developed by Bigwood Systems) to demonstrate improved operation and planning of the East Kent 132 kV distribution network. The project demonstrated that the network can be run closer to its design limits, releasing network capacity and deferring the need for significant customer-funded reinforcement. It also reduced the amount of renewable electricity output that needed to be curtailed during essential maintenance or equipment faults.

According to a press release from UK Power Networks, KASM was recognized by the judges as a truly innovative and industry-first project that allows for better real-time analysis of what is happening on the electricity network, making for an even more reliable network. The trial also allows more renewable energy such as wind and solar generation to safely connect to the network and at a lower cost. Having more renewable generation connected to the network means more customers will have access to cleaner and cheaper energy without compromising on reliability.

Over the summer period alone, the Kent Active Management System (KASM) trial managed to save more than 4,000MWh of what otherwise would have been lost renewable energy production. If the same amount of energy had been generated by fossil fuels instead, it would have emitted as much carbon dioxide as 1,500 flights between London and New York. If the Kent trial is rolled out nationwide, it will save customers over £65m by 2030.

Welcoming the award, Ian Cameron, head of innovation at UK Power Networks said, “For the Kent Active System Management project to be recognized as Innovation of the Year is a great achievement for UK Power Networks and an endorsement of innovative technology that is helping to improve reliability of supply while also helping to move the UK to a greener future.”

Chiang received his Ph.D. in Electrical Engineering from the University of California, Berkeley. He is currently a Professor of Electrical and Computer Engineering at Cornell University. Dr. Chiang is the founder of Bigwood Systems, Inc. (BSI), Ithaca, NY and Global Optimal Technology, Inc., Ithaca, NY. He was recognized as an IEEE Fellow in 1997 and became a full professor at Cornell in 1998. Dr. Chiang holds 17 U.S. and overseas patents and several consultant positions. He and his research team have published more than 400 papers in refereed journals and conference proceedings, obtaining an h-factor of 56. Dr. Chiang is the author of two books: Direct Methods for Stability Analysis of Electric Power Systems: Theoretical Foundations, BCU Methodologies, and Applications (Hoboken, NJ, USA: Wiley, 2011) and (with Luis F. C. Alberto) Stability Regions of Nonlinear Dynamical Systems: Theory, Estimation, and Applications (Cambridge, U.K.: Cambridge Univ. Press, 2015). He has served as an associate editor for several IEEE transactions and was on the Editorial Board for both IEEE Japan and the journal Electric Power Components and Systems.

Researchers have developed collectives of microrobots - each slightly larger than a hair's width - capable of reconfiguring their swarm behavior to move in circles, bunch up into a clump, spread out... Read more about ‘Swarming’ microrobots display versatile movement