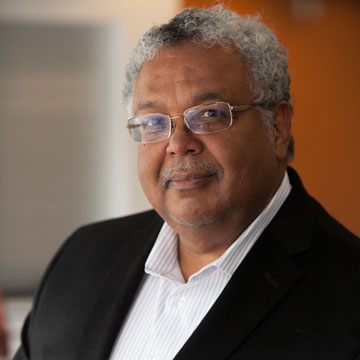 Emeritus
Electrical and Computer Engineering
MGS22@cornell.edu
Back to Directory

Electrical Engineer, Computer Scientist and Engineering Professor Michael G. Spencer was born in Detroit, Michigan. He grew up in Washington, D.C. and traveled to Ithaca, New York to study at Cornell University. He earned his B.S. degree in 1974 and his M.S. degree in 1975. Spencer worked at Bell Laboratories from 1974 to 1977 before returning to Cornell to receive his Ph.D. degree in electrical engineering in 1981.

He joined the faculty of Howard University as an assistant professor in 1984. Spencer also founded the Materials Science Center for Excellence in 1984 and served as its director for the entirety of his career at Howard. He spent the next eighteen years working and researching at Howard, becoming a full professor in 1990 and the David and Lucile Packard Chaired Professor of Materials Science in 1999. During this time, Spencer also worked as a visiting scientist at the National Aeronautics and Space Administration (NASA)’s JET Propulsion Laboratory. In 1999, he returned to his alma mater, Cornell University as Professor of Electrical and Computer Engineering. He served as Associate Dean of Research and Graduate Studies for the College of Engineering from 2002 to 2008. Spencer is an Emeritus Professor in the School of Electrical and Computer Engineering at Cornell University.

In 1985, he received the Presidential Young Investigator Award from the National Science Foundation. Spencer also received the QEM (Quality Education for Minorities) Giants of Science Award and the Allen Berman Research Publication Award from the Naval Research Laboratory. He served as one of the directors for the National Science Foundation (NSF) Nano-Fabrication Network. Spencer was a member of the program committee of the American Vacuum Society and the International Conference on Silicon Carbide and Related Materials.  Spencer has severed on the review of manufacturing-related programs at the National Institute of Standards and Technology (NIST), the panel on sensors and electron Devices for the National Research Council (National Academies) and the committee on assessment of solid state lighting for the National Research Council (a part of the National Academies of Science and Engineering) March 2011-present.  He also held memberships in the Electronic Materials Conference Organizing Committee and the Compound Semiconductor Symposium Organizing Committee.

My research focus is in growth of compound semiconductors, and graphene, microwave devices, power conversion devices and solar cells. My particular interests are correlation of device performance with material fabrication.

The life and work of Cornell University professor Michael G. Spencer will be included in the landmark “The HistoryMakers” collection, now archived at the Library of Congress. Read more about 'HistoryMakers' includes work of ECE's Michael Spencer

The award (1 million per year for 5 years) will be shared approximately equally between Cornell and Columbia (Columbia is the lead). The principal investigator is Rick Osgood at Columbia and Professor Michael Spencer will lead the Cornell efforts. Read more about AFOSR MURI Award