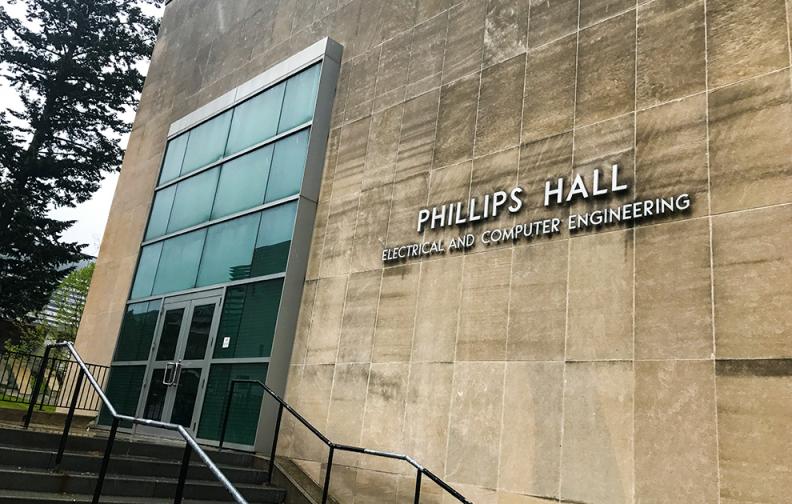 The 1999 Electrical Engineering Advisory Committee agreed with those faculty who suggested the name change in order to attract students who might be unaware that EE was active in the computer field. After some discussion, the faculty voted overwhelmingly in favor. The associate director at the time, Paul Kintner, summarized the rationale in the Spring 2000 issue of Connections:

“We live in an age when electrical and computer engineering is primarily characterized by change and innovation. Rapid evolution in materials, devices, communications, information systems and the impact of these advances on our social and environmental fabric, demand that students be grounded in basic knowledge that they adapt throughout their lives. The School of Electrical and Computer Engineering will deliver these concepts through a broad program of courses that consider the latest technological developments, the processes by which they arise, and the foundations upon which they rest.”

Professor Clifford Pollock, who became director of ECE a year after the change, said the aim was “to make students aware that our field was broader than just the transistor. And it worked! Almost overnight our enrollment doubled.”

“Long before the name change,” he said, “we were organized into four areas—semiconductors, plasma, communications and computers—but with most emphasis on the physics and mathematics of electrical engineering.”

As breakthroughs in personal computing, peripheral devices, and the internet began to revolutionize the field throughout the 1990s, world-wide interest in computers grew. Pollock recalled that the department realized: “We’ve got to hire more people in this area, and we’ve got to build it up because digital technology is clearly becoming the new way to do things.”

Rajit Manohar and Mark Heinrich joined Cornell as assistant professors in July 1998 and created the Computer Systems Laboratory soon after. “They were two brilliant guys,” said Pollock. “They put in their own network, helped hire two more computer systems faculty, and pretty soon the computer systems areas were growing. They were leading us.”

The strength of the rebranded School of Electrical and Computer Engineering was its expansive view. Building from foundations in physics and signals, ECE is concerned with all aspects of computer engineering: algorithms, devices, chips—the entire stack. The response from students was overwhelmingly positive.

In the Fall of 2000, the first semester after the name change, 21 sophomores were affiliated with ECE. In Spring 2001, that number had grown to 148. “It was huge,” said Pollock. “Everyone wanted to be ECE.”

The paper, titled “A truly one-way lane for surface plasmon polaritons,” is published in Nature Photonics, the premiere journal of optoelectronics, laser science, imaging and communications in the... Read more about Creating “one-way lanes” for light in plasmonic structures

The Bovay Program in the History and Ethics of Engineering seeks to be a catalyst for consideration of social and ethical issues in the Cornell College of Engineering. Dr. Park Doing, lecturer in... Read more about Engineering Ethical Students