Olalekan Afuye and Xiang Li , both Ph.D. students in ECE, are the lead co-authors of a paper titled “Modeling and Circuit Design of Associative Memories with Spin Orbit Torque FETs."

“In the paper,” Afuye said, “we explore building associative memories (CAM/TCAM) using the built-in logic functionality of SOTFETs, which are a new kind of transistor/memory being developed by multiple materials engineering groups at Cornell.” 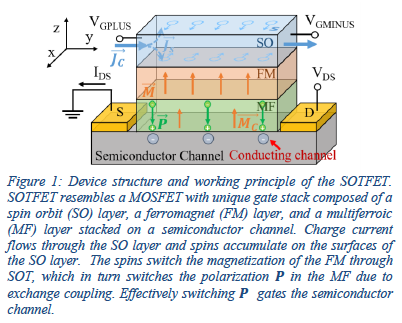 “Essentially, we are trying to extend what we can do with CMOS,” he continued. “This paper introduces a circuits model for SOTFETs and verifies associative memories functionality using the developed model.”

The paper states: “The SOTFET utilizes a FET structure with a ferromagnetic-multiferroic gate stack that enables read/compute and write functions to be isolated. This is achieved by a combination of a ferromagnetic layer that is programmable via spin orbit torque coupled to a multiferroic layer that also couples into the gate of a traditional FET.”

“Using such a device we demonstrate MRAM, CAM, and TCAM functionality with 3 to 5 transistors, a significant decrease over the CMOS alternative circuits, showing that such a device can enable low cost and compact associative memories not currently feasible with CMOS devices.”

When asked about future applications, Afuye spoke about the possibilities that might emerge for low power devices. “The SOTFET combines both memory and logic functionality into one device, opening up new possibilities in low power applications,” he said. “For example, you can imagine incorporating AI in low power devices which would not traditionally use AI because of the high energy consumption associated with standard CMOS approaches.”

This research is supported in part by the Semiconductor Research Corporation and by the National Science Foundation.