Professor Aaron Wagner and Assistant Professor Francesco Monticone were honored for their exceptional teaching at last month’s New Faculty Reception, held virtually for the first time. The teaching awards recognize outstanding individual efforts as well as work done to advance and modernize curricula within ECE. We are proud to share details of their awards, including comments from some of their students. 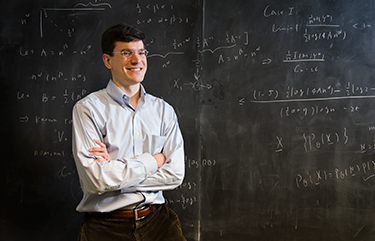 Aaron Wagner received the Ralph S. Watts '72 Award. He led the charge to fundamentally change the ECE sophomore and junior level curricula, and developed a brand new course, Data Science for Engineers (ECE 2720 to enthusiastic student reviews. The course was initially offered on a trial basis in Fall 2018, and then to a larger enrollment of 63 students in Fall 2019.

Students gave the course very high ratings and extremely enthusiastic comments, such as: “Professor Wagner is one of the rare instructors at Cornell who actually seems to value his role as an instructor as much if not more than his role as a researcher. Awesome lectures.”

Francesco Monticone received the Michael Tien '72 Award. Since joining Cornell in 2017, Monticone has established himself as one of the top teachers in the department. He developed two new courses, Electrical and Optical Metamaterials (ECE 4380) and Molding Light Flow (ECE 5970), and taught the ECE Foundation course ECE 3030 in Fall 2019.

One student described him this way: “Professor Monticone has that innate ability to teach where complicated material can become substantially easier when explained by him. [He can] explain something you never understood, and you immediately feel like you understand it beyond the surface level.”

At the event, College of Engineering Dean Lynden Archer said: “There are many paths to teaching excellence. I’ve noticed a common theme which is that showing passion for your subject, showing that you care, and being available to students go a long way to getting students on board with your teaching.”