Image tag annotations are an important component of searchable image databases such as Flickr,  Picassa or Facebook. Such methods are becoming more and more important given the growing collections of user-provided visual content. Through image tagging we could build a complete image network and retrieve image more efficiently.

In the project, we build a system that allows a user to upload an  image and subsequently returns a set of tags (or annotations) for the uploaded image tailored to that user. For the part of collecting tags, we propose to select the tags from images that are similar to input one. When a user upload an image to the platform, we extract bag-of-word, color histogram and other low level features from that image, and then use k-nearest neighbor search to find out most similar images within our database. Since the linear k-nearest neighbor construction has time complexity of O(n2). In order to make sure such an approach computationally feasible, we adopt some fast k-nearest neighbor search algorithm, including k-d tree, k-means tree.

Juggling patterns are often described by a numerical notation known as siteswap. Each number in a siteswap represents the number of beats of each throw. While this notation is most often used for communicating patterns, the underlying math can be used to achieve autonomous pattern detection. Juggling balls were developed with an embedded system capable of determining the current juggling siteswap and changing color accordingly.

Internal accelerometers are used to record throws and catches while wireless RF transceivers communicate these events. A microcontroller inside each ball processes the accelerometer signal and prepares messages for transmission. An external microcontroller is responsible for recording the individual ball states and passing them into MATLAB for pattern detection. A signal is sent back to the balls to change the color of their internal LEDs based on this decision. Pattern detection methods were simulated in software prior to implementation.

Future improvements include a reduction in the time-to-detection and removal of the external unit for increased portability. Possible applications include use as a learning tool for the practicing juggler as well as increased entertainment value for the performer. Beyond juggling, a multi-object system with pattern recognition and wireless communication may have implications in areas like swarm-robotics. 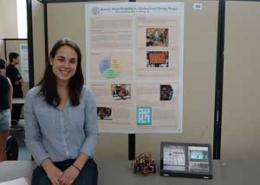 The Electrical and Computer Engineering Department's junior-level design course made it a goal to revamp the course's project. The goal of this design project is to create and set up a course project (CP) that draws upon skills from the three sophomore-level core courses (analog circuits, signal processing, and digital logic) and organize the CP so that it has appropriate difficulty for junior students. Secondary goals are for the CP to have a heavy teamwork component as well as an impressive demo. The chosen CP topic is a robotic maze-mapping scenario, where a robot is let loose in a maze and wanders around to create a cohesive map of the entire area.

In this design project, the CP will be embellished and fleshed out to have a complete prototype to serve as a demo and example for the class in the Spring. The CP will also be organized in such a way so that the CP has appropriate difficulty and interest level to the students. Design choices and responses of the students taking the course in the spring will be used to create an overall picture of the results of this design project. At the end of this design project, the junior-level design course will have an interesting CP with an appropriate level of challenge and teamwork. Having a more interesting and breadth-oriented CP will create better managers, project organizers, and team members of the students who take the course. 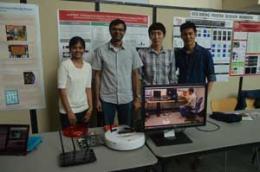 Developing FPGA prototypes using hardware description languages (HDL) is time consuming and limits the outreach of the designers. Instead, if the high level programming languages like C and C++ is used to develop hardware, then it can be developed much faster and can be adopted by wide range of programmers. The goal of this project is to develop a heterogeneous design which can drive robot based on the analysis of real-time HD video stream on FPGA. The entire project is done using one of the most popular high level programming language C++, which opens a new opportunity for software engineers who are interested in developing hardware prototypes without learning HDL languages. The purpose of the project is to learn the challenges and possibilities that high-level digital synthesis brings during development of the hardware.

iRobot Create is a mobile robotic platform which can be driven based on the input commands provided over serial interface. In this project, iRobot is programmed to drive in designated direction based on the movement of the object perceived from an HD video connected with FPGA. This involves many aspect of the hardware-software co-design including FPGA prototyping, High-Level Digital Synthesis (HLS), Embedded System Development, Software Programming, Networking and Computer Vision.

The goal of this project is to design and implement an ultrasonic transmit beamformer for studying the development of tumors in vivo using optical coherence elastography (OCE). In OCE, images are formed by measuring the elastic properties of tissue. A known pressure load is applied to the sample and by modulating the acoustic radiation force, highly localized 'palpation' can be performed. Moreover, Optical Coherence Tomography (OCT) is used to measure the displacement in the sample, thus allowing for the determination of strain. This project holds great promise in cancer pathology and palpation.

In this project, this pressure load is provided by a piezoelectric PZT (lead zirconate titanate) transducer phased array. Pressure waves are generated when a voltage pulse is applied to a PZT transducer. By applying time delayed pulses to each transducer element of the array, it is possible to generate an electronically steerable beam.

In this system, commercial beamforming ICs will be used due to higher delay resolution (<1 ns) that can be achieved. A Xilinx Spartan 6 FPGA and microcontroller will be used to control the system, as well as to interface to a computer by UART to communicate with a LabVIEW GUI that simultaneously interfaces to the OCT system. To generate enough pressure from each transducer, it is necessary to use high voltage (~+/-50V) pulsers at the output of each beamformer channel to drive the PZT directly. Pulses with frequencies of up to 10MHz will be generated by this system. 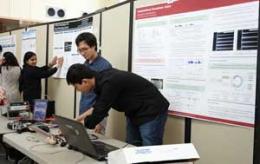 In this project, we designed a computational guitar that consists of a hexaphonic pickup and a digital signal processor (DSP). As an example application, we implemented a pitch correction algorithm that corrects the pitch of each string in real-time, which enables us to play the guitar "in-tune" when it is not. Our pitch correction algorithm operates in real time on a Texas Instrument DSP board (TI DSK6713) and combines frequency-domain pitch detection and time-domain pitch shifting.

Optical Coherence Tomography is an interferometric imaging modality that fills the gap between ultrasound and microscopy techniques, with biomedical applications in ophthalmology, dermatology, cardiology, and cancer research. A key specification of OCT systems is the numerical aperture (NA). A larger NA corresponds to a greater spatial frequency bandwidth. The choice of NA presents a trade- off. High-NA OCT systems have high optical resolution but low depth of field. Low-NA systems have poorer optical resolution but larger depth of field.

In a paper comparing imaging depth in OCT vs. Optical Coherence Microscopy (OCM), the Fujimoto group demonstrated that OCM (a high-NA technique) could be used to image tissue in high detail, but only for shallow depths. This project suggests that computational methods may allow us to process OCM data to produce good images from deeper within tissue, helping overcome the limitations of purely hardware based systems. Switching between low-NA and high-NA systems is inconvenient, but computational reduction of NA can make possible obtaining low-NA results from high-NA data. 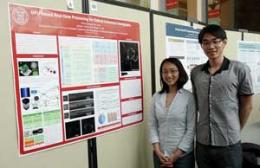 Real-time processing of optical coherence tomography (OCT) images has the potential to greatly enhance biomedical research and clinical diagnosis. However, due to the large sizes of high-resolution volumetric datasets, the complexity of OCT reconstruction algorithms and the high image acquisition rates of typical OCT systems, real-time OCT image processing is far beyond the capability of CPUs.

By integrating a GPU into an OCT system, our group has accelerated the processing speed up to 13 frames/s, which is a significant boost compared with 1-2 frames/s using only CPUs. Benefits of this project includes providing real-time visual feedback for optical system alignment, as well as optimizing the image quality obtainable for multiple  research projects in the lab, such as the study mechanical properties in the development of tumors in vivo.