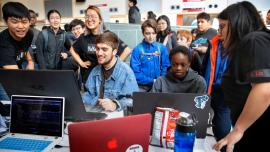 Can a digital platform of women’s stories inspire and advise the next generation? Are there low-cost ways to reduce the stigma of menstruation in rural India? How do you balance an autonomous bicycle? Can a video game player build a city on a folklore-inspired turtle’s back? Lindsay France/Cornell University A student explaining PSYAFE, a platform to match students with mental health professionals. These were among the challenges met by a diverse array of student research projects, on display April 24 at the annual BOOM (Bits on Our Minds) showcase in Duffield Hall. More than 200 students, the... Read more

Engineer, entrepreneur, innovator and philanthropist Irwin Jacobs ’54, BEE ’56, will speak at Cornell and be presented with the second Cornell Engineering Distinguished Alumni Award on Monday, April 22, at 4 p.m. in 101 Phillips Hall Auditorium. President Martha E. Pollack will introduce the event, and Lance Collins, the Joseph Silbert Dean of Engineering, will serve as moderator. The event is open to the Cornell community. Considered one of the world’s foremost communications scientists, Jacobs is the founding chairman and CEO emeritus of Qualcomm Inc. He is the undisputed father of code... Read more

Nick Comly, a senior double-majoring in ECE and CS, has been named a Merrill Presidential Scholar – one of the highest honors for undergraduates at Cornell. Nominated by their department, recipients are then selected by the dean of each of the University’s seven undergraduate colleges. Only 1% of each year’s graduating class receives the award. Each Merrill scholar is given the opportunity to recognize the high school teacher who most inspired his or her scholastic development as well as the Cornell faculty member who most significantly contributed to his or her college experience. Comly is a... Read more

Francesco Monticone, assistant professor, ECE was recently awarded the 2019 Leopold B. Felsen Award for Excellence in Electrodynamics by the European Association of Antennas and Propagation. This career award is issued, by nomination only, to an early stage researcher under 40 years of age to keep the memory and scientific legacy of Prof. Leopold B. Felsen alive, as well as to foster academic excellence in the electromagnetics community, by giving recognition to outstanding fundamental contributions from early stage researchers in electrodynamics. The Award was officially presented at the... Read more

The Cornell China Center has announced eight China Innovation Awards to interdisciplinary teams of Cornell faculty. The winning projects were selected from among 34 proposals submitted by faculty leaders across 47 departments, centers and programs in Cornell’s colleges and schools. “We are excited about the potential for these projects to have far-reaching impact in and for China,” said Ying Hua, director of the Cornell China Center. “The grants will jump-start exciting, collaborative research, and help showcase Cornell and Cornell scholars in China.” Research teams were required to include... Read more

Paulin Jirkof & Petra Seebeck Lab Animal volume 48, pages 144–145 (2019) The assessment of physiological parameters, such as respiration rate, heart rate, blood pressure, or body temperature, is crucial in small animal veterinary practice and for many animal experiments. Monitoring vital signs is important during anesthesia as well as the post-surgical recovery phase, and the measurements can be used to detect cardiovascular diseases or to assess experimental treatments, e.g. during drug discovery and testing. Physiological parameters are also relevant for refinement research, as changes in... Read more 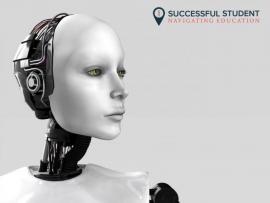 A new center established by Cornell and the Air Force Research Laboratory (AFRL) aims to discover the atomic secrets of beta-gallium oxide, a promising new material that has piqued the interest of engineers for its potential to allow electronic devices to handle dramatically more power. Sixteen members of the AFRL joined researchers at Cornell March 7 during a daylong kickoff event for the AFRL-Cornell Center for Epitaxial Solutions (ACCESS). The center is made possible by a three-year, $3 million grant from AFRL with additional funds from Cornell and an option for a two-year extension. “The... Read more 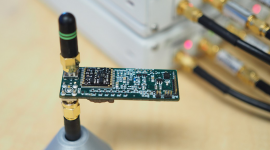 Did something move just a hair? Cornell engineers have developed a simple and reliable way to measure it. Researchers have created a radio frequency identification (RFID) system capable of taking high-frequency measurements as small as 50 microns, about two-thirds the width of a human hair. In water, high-frequency 5-micron measurements can be achieved. The resolution is 200 times more accurate than UHF radio measuring capabilities, opening potential applications spanning from safety systems that monitor the structural integrity of buildings and bridges to robotic feedback controls that allow... Read more

Five ECE faculty have received Google Faculty Research Awards. The program provides unrestricted gifts to support research at institutions around the world, recognizing and supporting world-class faculty pursuing cutting-edge research in areas of mutual interest. Proposals are categorized into broad research topics. The goal of the Google Faculty Research Awards program is to identify and strengthen long-term collaborative relationships with faculty working on problems that will impact how future generations use technology. The five award recipients from ECE are: Jayadev Acharya, assistant... Read more